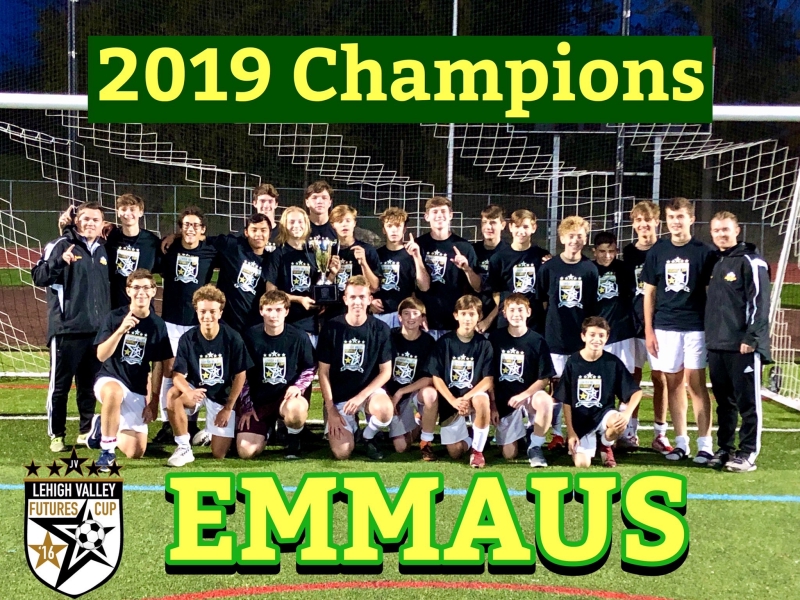 The Hornet JV ends the season with an overall record of 17-3-2. Coaches Matt and Andy Squire have again developed a group of unfamiliar players into a championship team. A strong future for Emmaus soccer seems assured with this group of players.

The Emmaus Boys Soccer Team, with an 18-3-0 record and EPC championship, enters the PIAA District XI Tournament as the top seed. The Hornets will play on Thursday October 24 against the winner of the #8 East Stroudsburg South vs #9 Freedom game.

Playoff bracket can be viewed at: https://www.districtxi.com/fall/soccer-b 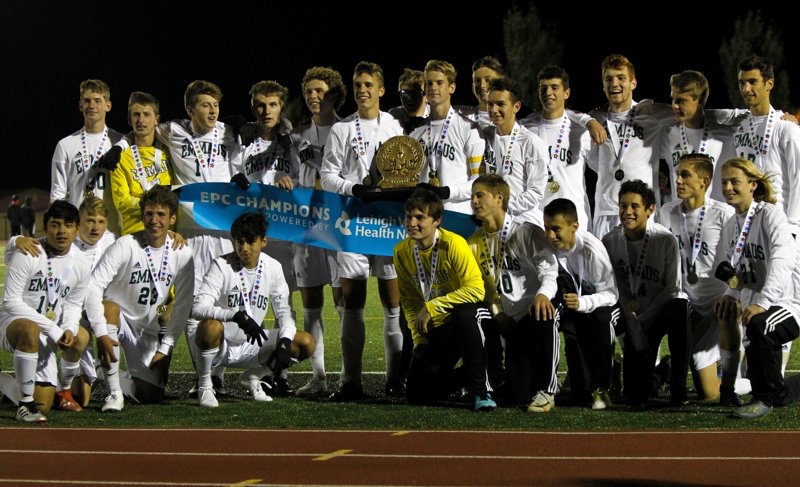 The Emmaus High School Boys Soccer Team defeated top-seeded Liberty 1-0 to earn the 2019 Eastern Pennsylvania Conference Championship. The game was played at Whitehall High School on Thursday October 17 in blustery conditions. The only score of the contest came early in the second half, when the 4 Hornet seniors who have been together on the Varsity since their sophomore year came together to produce the goal. Andrew Gaines sent a pass that set Thomas Hanvey free on the sideline. Hanvey dribbled hard down the left side to beat his defender to the end line, then crossed a ball that Jake Groh headed ever-so-slightly to change the path of the ball. AJ Febbraro beat the defense in front of the goal to one-touch the ball into the net to give Emmaus the only goal it would need. The Hornets dominated the flow of the game, producing most of the offense. Emmaus put one shot off the crossbar and another off the post in the first half, and had an opportunity to score on a penalty kick late in the game that was stopped by a great save from the Liberty keeper. Once again, Emmaus’ defense shone, suppressing the Hurricane attack and preventing them from creating an effective shot on goal.

This is the 17th league championship for the Hornets, and the first for this group of players. Congratulations!

With the win, the Hornets overall record improves to 18-3-0. Emmaus will enter the PIAA District XI tournament as top seed for the AAAA division.

The Emmaus Boys Soccer Team met Parkland in an EPC semifinal match at Nazareth High School Stadium on Tuesday, October 15, and came away with a 2-1 double-overtime victory. The themes of the victory were possession, defense, and opportunity. Emmaus dominated possession in the first half, and had great opportunities including 2 open shots that snuck over the crossbar and a direct kick that struck the crossbar. However, Parkland, whose opportunities in regulation mostly arose as a result of Emmaus fouls, converted a direct kick from just outside the 18 with 5 minutes to play in the half to take a 1-0 lead. The Hornets showed the ambition to rally a minute later. Junior Hudson Peck dribbled hard to the right side of the box and crossed the ball. Senior Andrew Gaines created opportunity when he charged through three Parkland players and over the ball, which deflected out of the crowd and came to rest in front of Gaines, who poked the ball into the net to even the score 1-1. The second half, although scoreless, was dominated by Emmaus possession. The Hornets had multiple opportunities with 6 solid shots on goal, and an equal number that sailed wide or over the crossbar. Senior Jake Perry headed a corner past the keeper that put the crowd to its feet, but Parkland’s far post defender was able to deflect the ball from the goal line. The Trojans were only able to mount 3 serious threats, 2 on set plays from free kicks and 1 on a ball kicked over the defense. The Hornet defenders, seniors Joe Huck and Thomas Hanvey and sophomores Jaeden Amato and John Hanvey, repeatedly repelled the Trojan attack by header, half-volley, or body position. Junior keeper Chris Buck boldly charged down Parkland’s attempts to kick the ball over the defense. The first overtime saw the Trojans emerge with stronger ambition. Parkland put together 4 solid possessions, but the Hornet defense suppressed any attempt to shoot. Emmaus threatened as Gaines sent a cross to the far post that outreached senior Jake Groh by a whisker. Senior Eric Johnson fired a direct kick from just outside the box that the Parkland keeper was able to deflect. Parkland maintained its ambition in the second overtime, sending two deep balls with potential, one suppressed by Buck, and the other unable to be controlled for an effective shot. In the end, it was Emmaus that seized the opportunity. Huck took a ball on the right sideline and used his left foot to direct a cross that curled in toward the far post. Again it was Gaines who clipped the ball away from a defender, toed it into the diving keeper’s chest as he was knocked to the ground, and, still more on the ground than upright, kicked the rebound into goal for the win.
The 2nd seed Hornets will play 1st seed Liberty in the Eastern Pennsylvania Conference Tournament Final to be played Thursday October 17, 7:45, at Whitehall High School. Emmaus’ record improves to 17-3-0 for the season.
See game highlights from TV2 Sports https://vimeo.com/367051201

2019 Season Statistics can be viewed on the document below.