Behind the solid goalkeeping of junior Chris Buck, the Emmaus Boys Soccer Team earned a hard-fought 1-0 victory over host Downingtown West on Saturday September 7. Senior midfielder Eric Johnson scored the only goal of the day, pounding a direct kick from just outside the penalty area on the right into the top left corner. The Hornets controlled the pace of the play, although the Whippets were able to use speed to mount several countering attacks. However, Buck and his defense were able to protect the goal area. The Hornets improved their record to 5-0-0.

The JV Hornets were depleted by injury and call-ups to varsity, but made a strong showing in a 1-0 loss to the JV Whippets. The JV are now 2-2-1.

The JV Hornets resumed their winning ways with a 2-0 victory over the Northampton JV. Freshman forward Cam Werner delivered a solid header to open the scoring and sophomore forward Logan Mains was able to dribble around the keeper and tuck the ball into the net for the second goal. Emmaus JV moved to 2-1-1 on the season.

Hornets Down Trojans in OT

Emmaus Boys Soccer hosted the Parkland Trojans at Memorial Field September 5 as the teams held their annual Red Card For Cancer joint fundraiser. Hornet senior starters AJ Febbraro and Thomas Hanvey were off due to injury and the squad started slowly. Parkland scored early for a 1-0 lead and kept the ball on the Hornets’ end most of the first half of play. Emmaus evened the score early in the second half. Senior defender Jake Perry directed a free kick from just inside the Parkland half toward the far post and junior midfielder Pat Walsh elevated above the crowd to earn the goal with a well-struck header. The Hornets came alive and played a strong second half but neither team could manage to score again in regulation. Three minutes into overtime, Perry again took a free kick from the midfield directed toward the far post. Walsh again slipped behind the defense to strike a shot on goal. This time the Trojan keeper deflected the shot but senior forward Andrew Gaines charged through to drill home the game winner off the deflection. The Hornets moved to 3-0-0 on the season. TV2 Sports highlights can be watched at: https://vimeo.com/358320404.

The Hornet JV lost to Parkland JV 3-0 in the opening game of the evening to bring their record to 1-1-1. 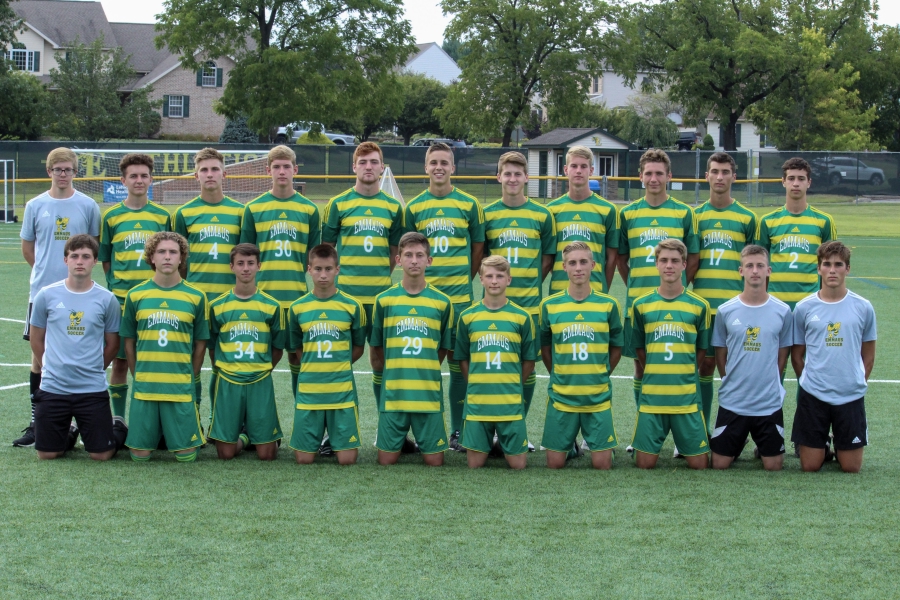 In a September 2nd poll, TopDrawerSoccer.com ranked the Hornets Boys Soccer Team #9 in the state of Pennsylvania. Hornet Pride!!

The Hornets moved to 2-0-0 with a decisive 4-0 shutout at home versus Northampton on August 31.
The Hornets were unable to capitalize against a tight Northampton defense despite several first half opportunities and went into the second half tied at nil. Junior forward Hudson Peck opened the scoring for Emmaus at the 33’ mark, taking a cross from senior forward Andrew Gaines and driving a one-touch low into the left corner from the top of the box. After that, the floodgates opened. Senior forward Jake Groh cleaned up a rebound of a Hudson Peck shot for a second tally. Peck struck again from another Gaines feed, capitalizing on an opportunity created by a lofted cross from senior defender Thomas Hanvey. Junior midfielder Marco Silva closed the scoring with 4 minutes to play, driving a quick strike to the low left corner after junior midfielder Josh Whalen was brought to the ground but managed to direct the ball toward Silva’s feet.
The Hornet defense recorded their second shutout of the season. Senior defenders Thomas Hanvey, Joe Huck, and Jake Perry, along with sophomore Jaeden Amato kept the Konkrete Kids from providing any true test for the Hornet goalkeepers.

The Hornet JV also recorded a victory, 3-1, over the visiting Northampton JV squad. Trailing 1-0 with 20 minutes to play, the Hornet JV fought back and produced 3 goals to deliver the win. Sophomore forward Brian Flor scored 2 goals for Emmaus and sophomore midfielder Jack Lawrence added another.