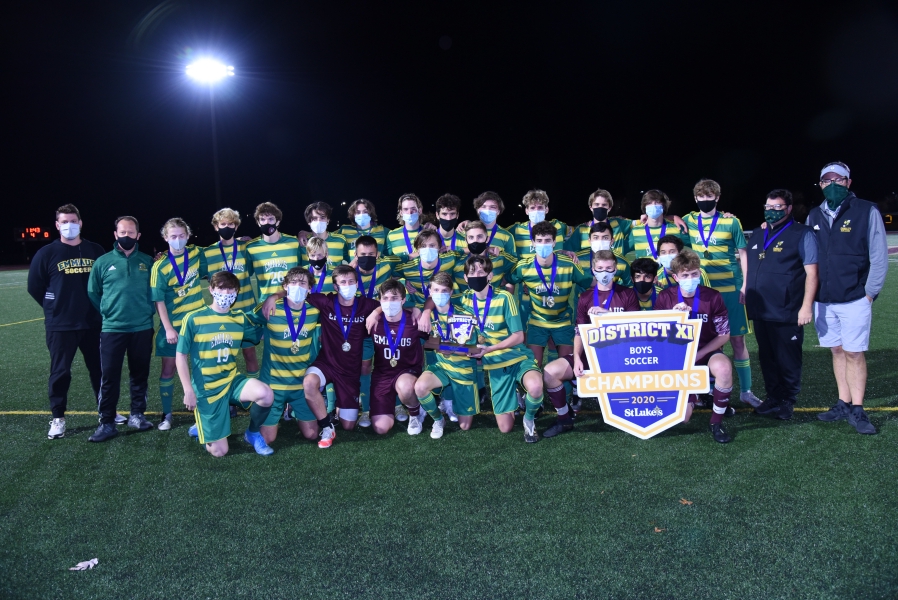 Emmaus coach John Cari was awarded the District 11 Class 4A championship trophy Saturday and it remained in his car until Tuesday night. Turns out, Cari and his Green Hornets get to hold onto the trophy for the rest of time.

Emmaus, which thought it won the crown when Nazareth withdrew from the tournament Friday, secured the title on the turf at Whitehall High School’s Zephyr Sports Complex Tuesday night with a thrilling 1-0 two-overtime win over Nazareth in the 4A boys soccer final.

Senior Nathan Romig redirected a shot by Hudson Peck past Blue Eagles goalkeeper Nolan Booth and into the net with 11:43 remaining in the second OT period to secure the program’s second straight district championship and its 17th overall.

“The coaches told me to get in front of the post and I listened to them,” Romig said. “The ball bounced out and Hudson had a great shot that just redirected off my foot. Definitely, the biggest goal I’ve ever scored.” “Nate was on the near post,” Cari said. “He was in the right spot at the right time. Nate had a great game off the bench and I feel good he came up with the big one.”

Emmaus improved to 13-1 overall and advanced to the PIAA state tournament, which kicks off Saturday with quarterfinal-round action. The district’s No. 1 seed, Emmaus put pressure on in the second half and both overtime sessions.

“Nazareth came to battle; I knew they would,” Cari said. “I thought we did a great on their two big players, shutting them down. They’re dangerous anytime and anywhere on the field but I thought we were effective controlling them.”

Booth, a junior, was outstanding in the goal for coach Gerry Petrozell’s second-seeded Nazareth squad. He made two saves on point-blank shots and was credited with 10 in total. The 4A final was originally scheduled for Saturday evening at Whitehall.

Nazareth, though, was forced to withdraw from the tournament late Friday afternoon due to an active COVID-19 case at the high school. The Blue Eagles reentered the playoffs Saturday when it was discovered the case did not affect the athletic programs and the championship was rescheduled for Tuesday night.

“There are no questions now, which is great,” Cari said. “I’m glad we won it on the field. It was just a very frustrating situation, on-off and is it a postponement or is it a cancellation. There was just a lot of emotion going through it. But Nazareth has a great team and I’m proud we were able to beat them.”

There are no comments for this announcement.